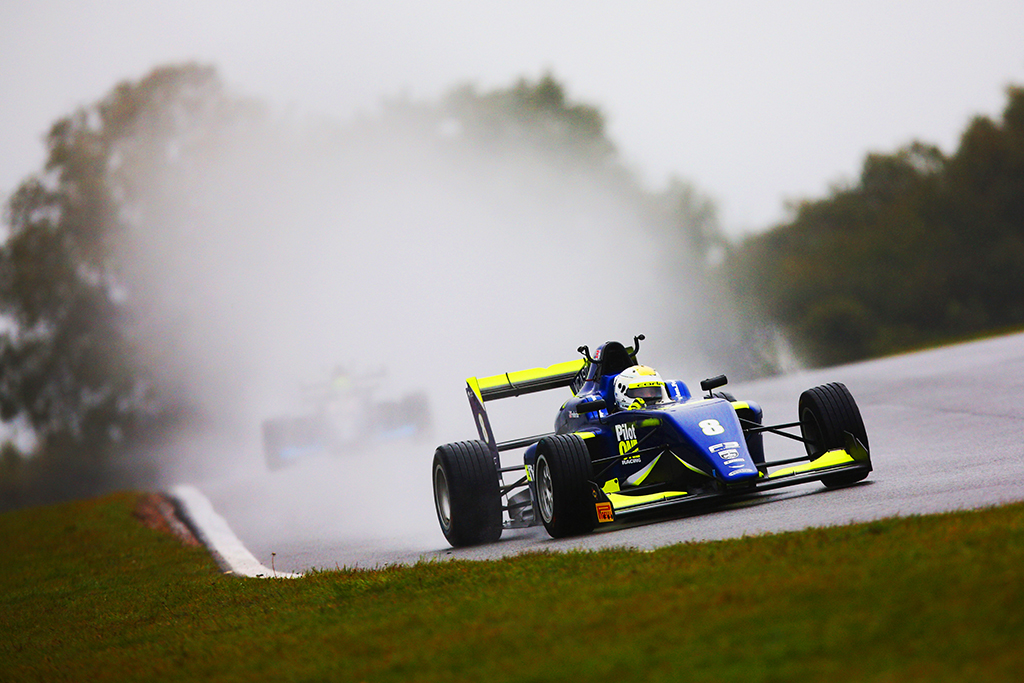 Carlin’s Kaylen Frederick headed an American top-two in the third session of the day at Snetterton, as the championship challenger put in two late flying laps good enough for top spot, and just edged Double R’s Benjamin Pedersen in the process. 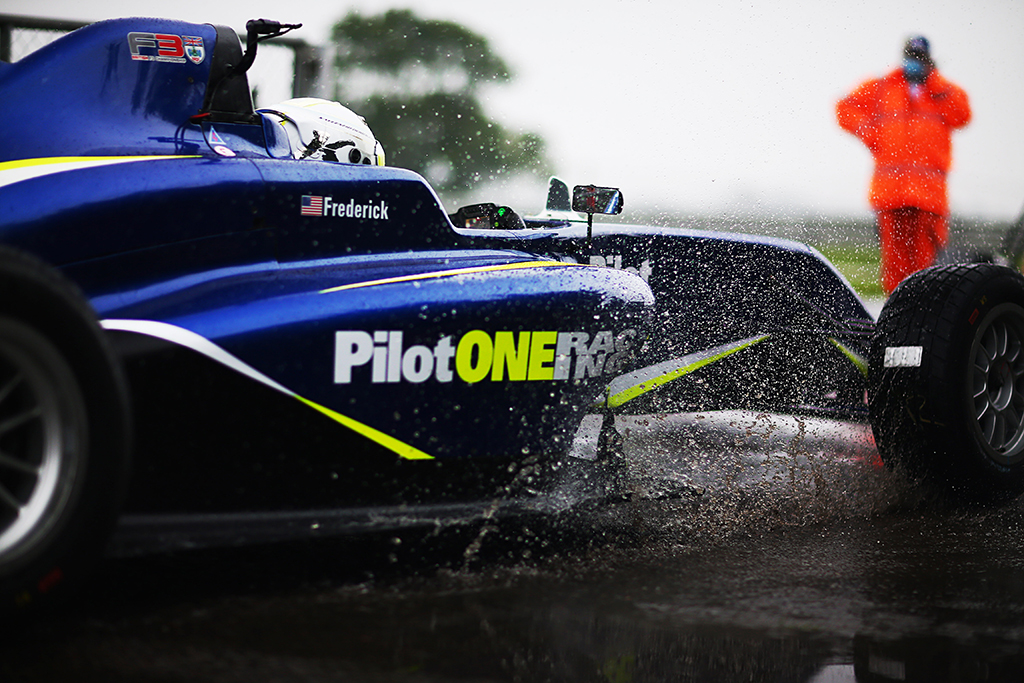 Foster was just 0.089 seconds quicker than Frederick, with the American’s teammate Nazim Azman moving up to third at the end of the session. 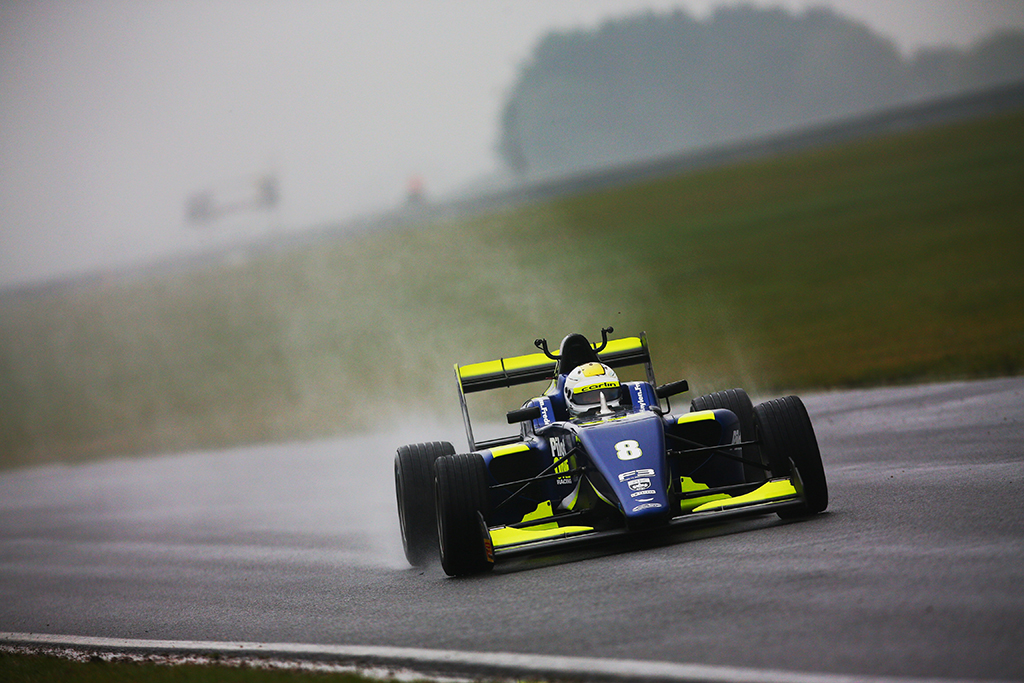 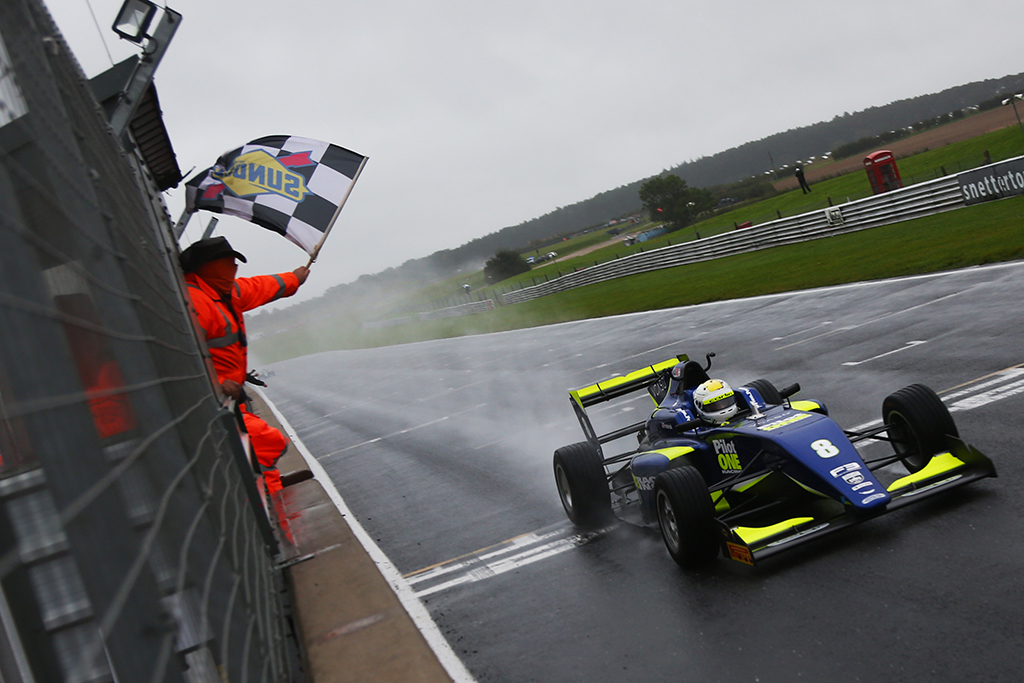 With the win in the bag, Frederick was able to ease off slightly, with Foster clawing the gap back to just over three seconds at the chequered flag.”

What they said: Snetterton Circuit Race 1:

“The conditions were really tricky with a lot less grip than in qualifying, so judging the start was quite hard. Even I had some wheelspin, but I had a relatively good start compared to everyone else. The start was key there, making sure you got traction. After that point, I built up my lead and just kept looking forward. Toward the end I took a couple of chill laps to make sure we brought it home. There was no point in trying to set the world on fire in those last few laps, so I just chilled at the end.

“We can really only focus on ourselves; we did a great job in qualifying and a great job in race one. We’ll see how much we can salvage for race two (in the reverse grid race) and the rest of the weekend.” 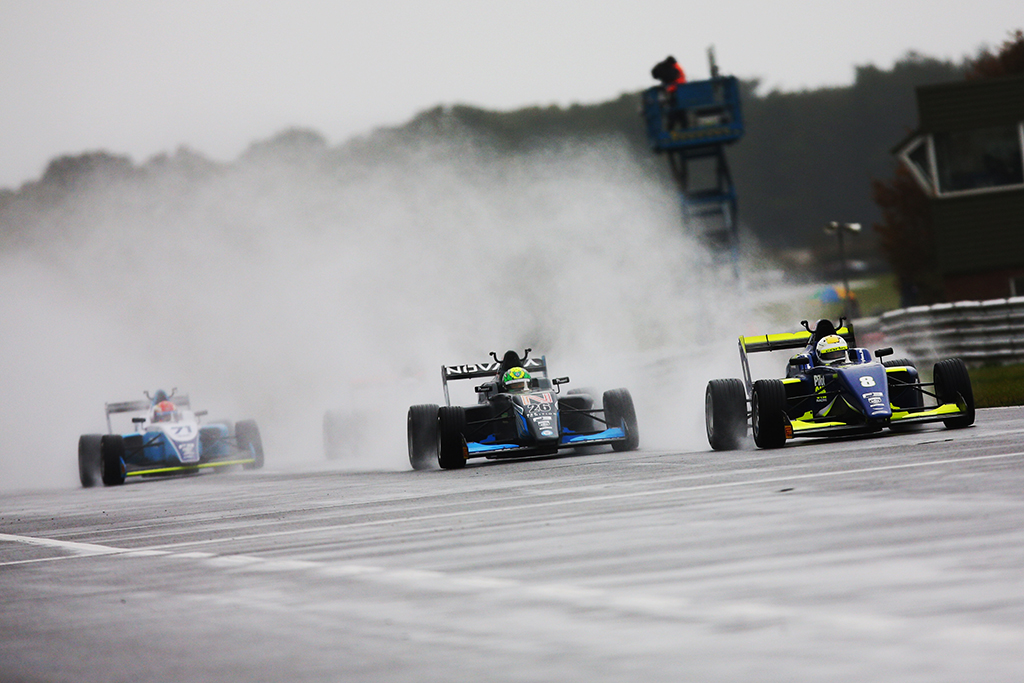 Kaylen Frederick made a masterful start from 16th in the reverse grid race, moving up to 7th halfway through lap 1. Once in 7th, Kaylen put his head down. At the righthand turn at Nelsons, driver Chaimongkol understeered into the side of Kaylen Frederick and put them both into the grass. Frederick rejoined in 16th position after the field had gone by and worked his way up to 12th before the race end. Sasakorn Chaimnongkol received a 5-place grid penalty for the Race 3 the driver incident.

”Double R Racing’s Louis Foster claimed his third win of the year in treacherous conditions in race three at Snetterton. In soaking wet conditions and with a safety car start, Foster finished over two seconds clear of Kaylen Frederick, with Benjamin Pedersen third, with Foster clawing back ground in the championship race.

Frederick in second though began to put the British contender under serious pressure, closing up to the Double R car’s rear wing at the end of lap five and the pair separated by less than half a second. Frederick then relaxed pace, unable to see in the spray at close quarters. After a couple of quick laps Foster began to pull out a margin of over two seconds and claimed his third victory of the year by 2.271 seconds, despite a fastest lap from Frederick on the final tour.” 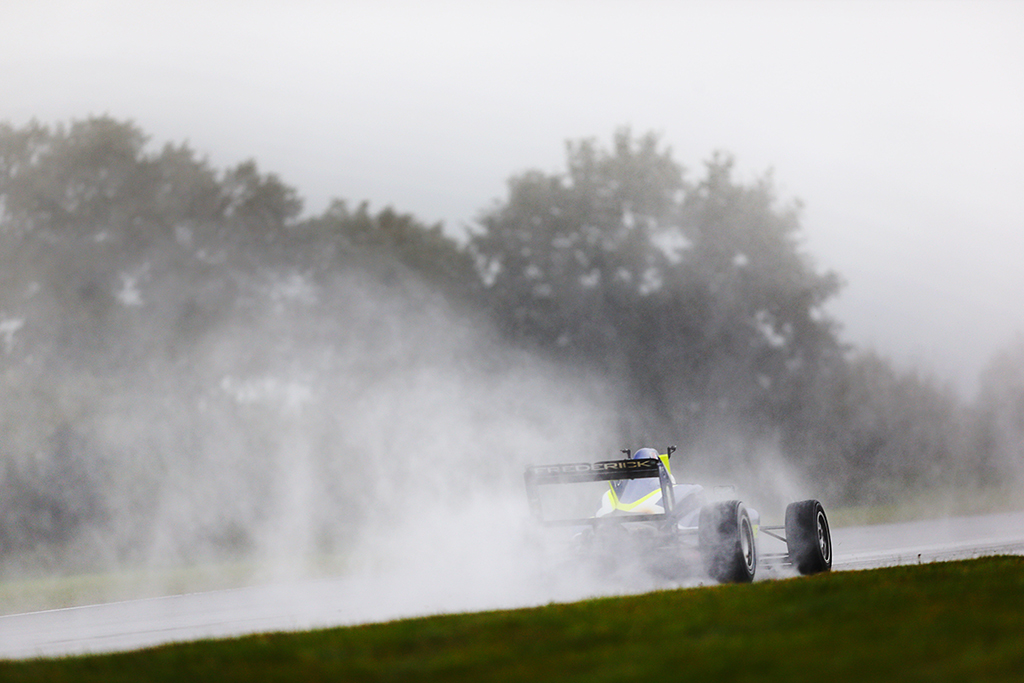 What they said: Snetterton Circuit Race 3:

“Obviously it was a bit strange, my first safety car start. Once rolling, whenever I tried to push right behind Louis I couldn’t see anything so I was always compromised. I had a couple of corners where I was right behind him but it would have been very easy to go off as I couldn’t see anything. I had great pace at the beginning and at the end, so it’s a bit of a shame (I couldn’t challenge for the win), but I’ll take a second place here.

“We’re all focusing on ourselves [in terms of the championship], but we’re doing a great job to catch up after my disappointing weekend at Brands Hatch where I went off in qualifying. It was a real shame what happened in Race 2 yesterday as we lost points there by Chaimongkol understeering into me and taking us both to the back. However, we’ve come back with a great result today so I’m happy.” 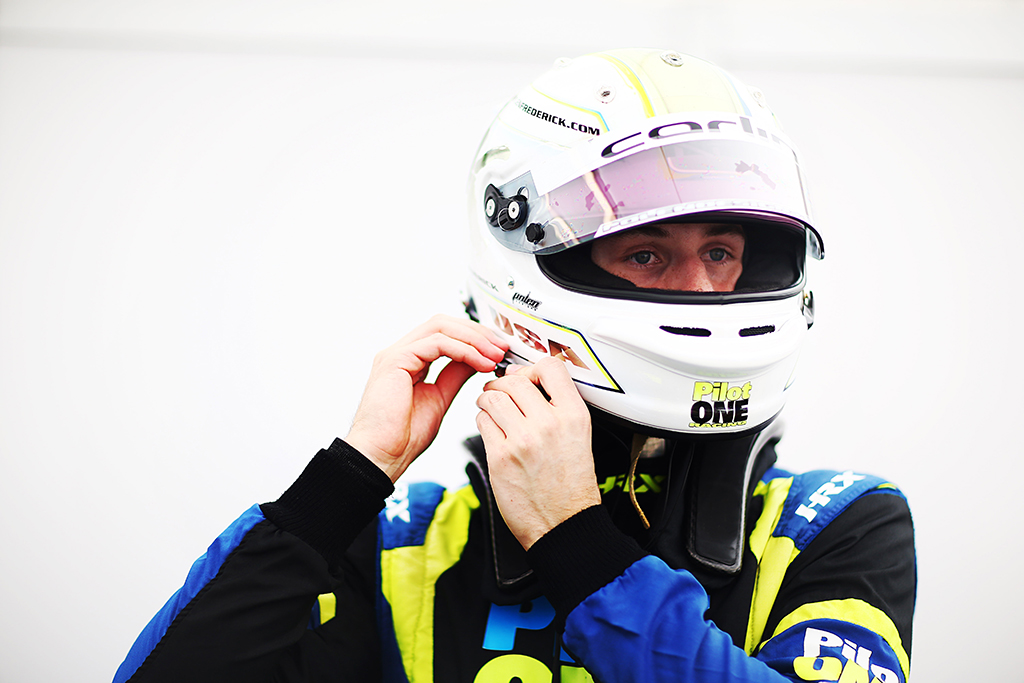 ”Douglas Motorsport’s Ulysse De Pauw claimed his second win of the year in the fourth and final race of the weekend at Snetterton. In wet conditions once more, De Pauw took advantage of a first lap off for pole sitter Louis Foster, and then headed home Carlin’s Kaylen Frederick .896 seconds behind, with the American’s teammate Nazim Azman taking third.”

What they said: Snetterton Circuit Race 4:

“With my eyes on the championship, I was prepared to settle for 3rd and another podium. Unfortunately (for Louis [Foster]) he out-broke himself going into turn two, which really helped Ulysse and I out. I think we both just capitalised on the opportunity. We were both quite quick. We pulled away quite quickly. I was catching up a little bit so we had a bit more pace than what we could show. It’s so hard to push up behind people with this much spray. I just didn’t want to risk anything, thought I’d settle in for a second place, we’d already got lucky and I wasn’t going to risk points for more. I dropped back to get fastest lap at the end.”

“Hopefully all the bad luck is behind us after Brands. We still struggled in race two yesterday when we were taken out. Hopefully moving forward, we can just keep getting these good results and we’ll be in a really great position.”

Kaylen Frederick has now closed the 59-point deficit to Maini after the Brands Hatch weekend to 9 points behind and remains 2nd in the championship. 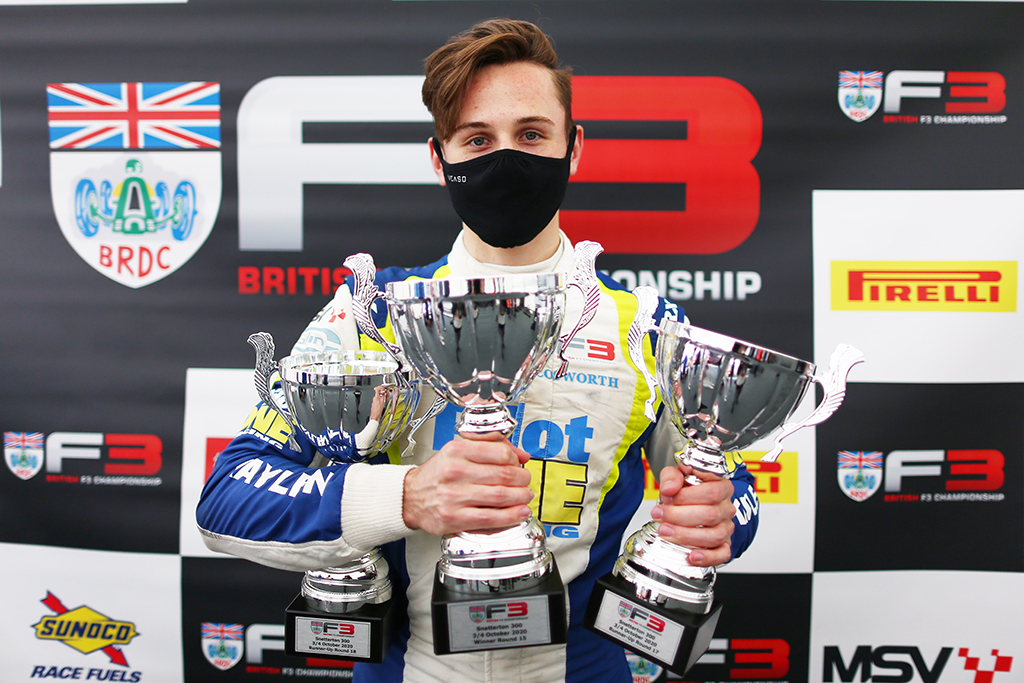