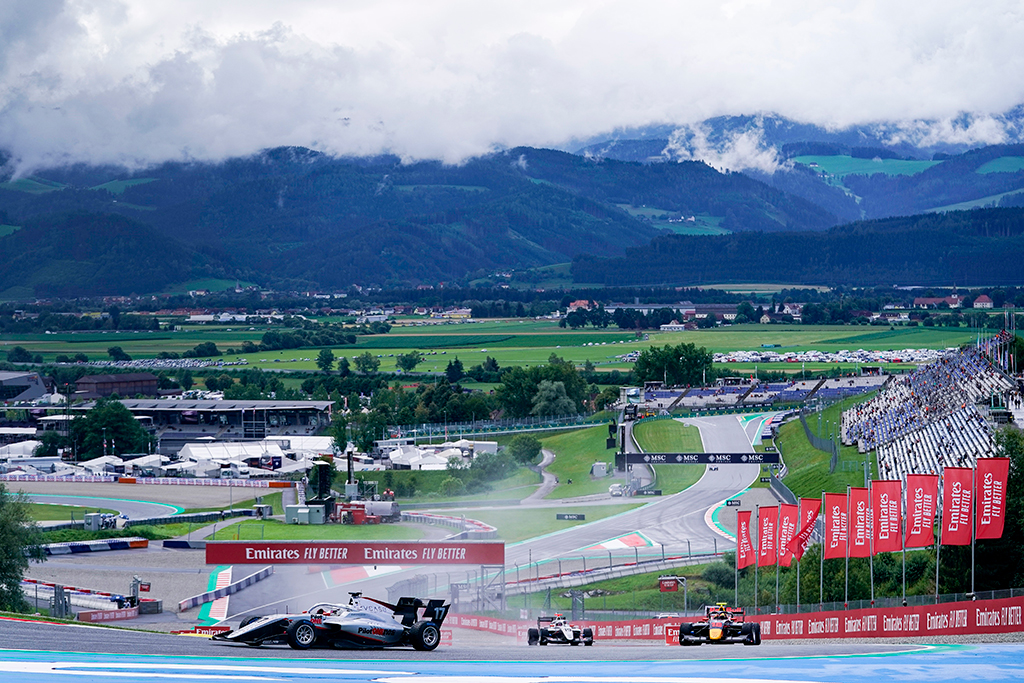 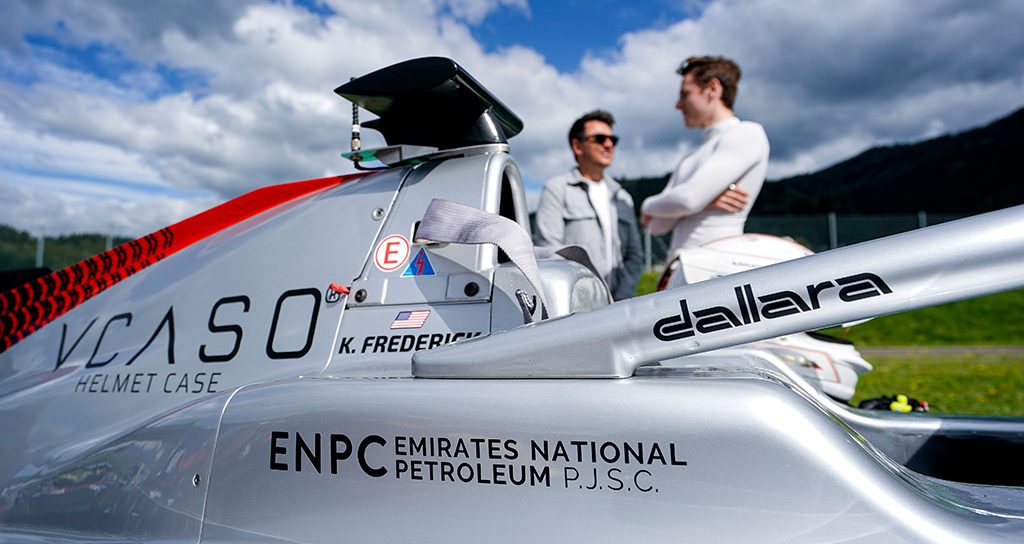 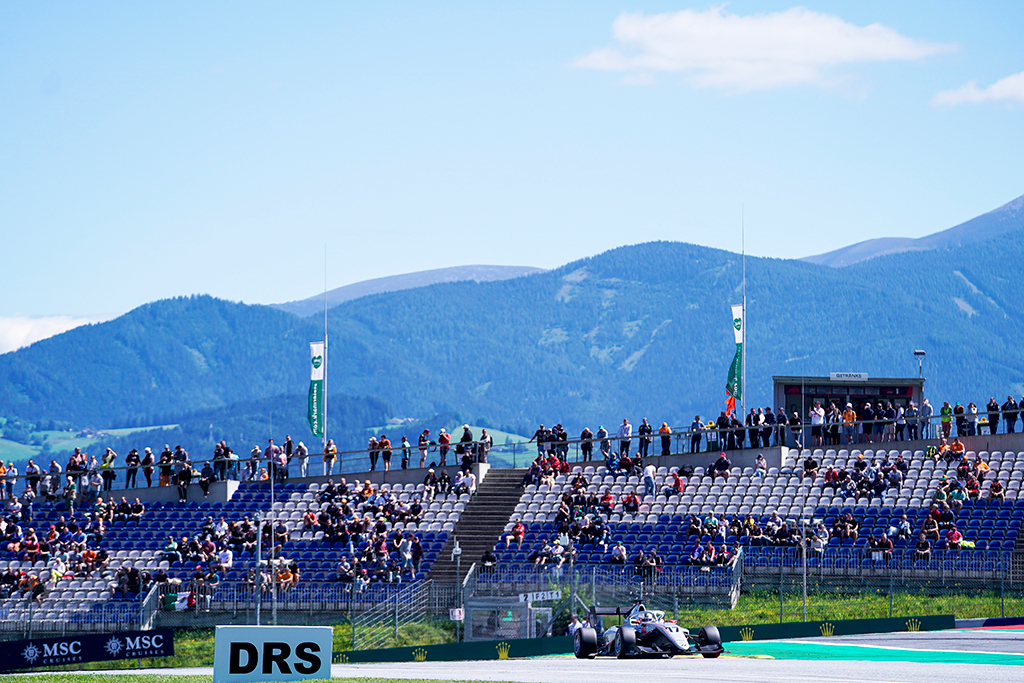 An engine oil leak was found and delayed the new tire run, and not allowing Kaylen to complete the planned push laps. The 3rd push lap was compromised by traffic, however Kaylen and Hitech were encouraged by the workings of car setup and balance. 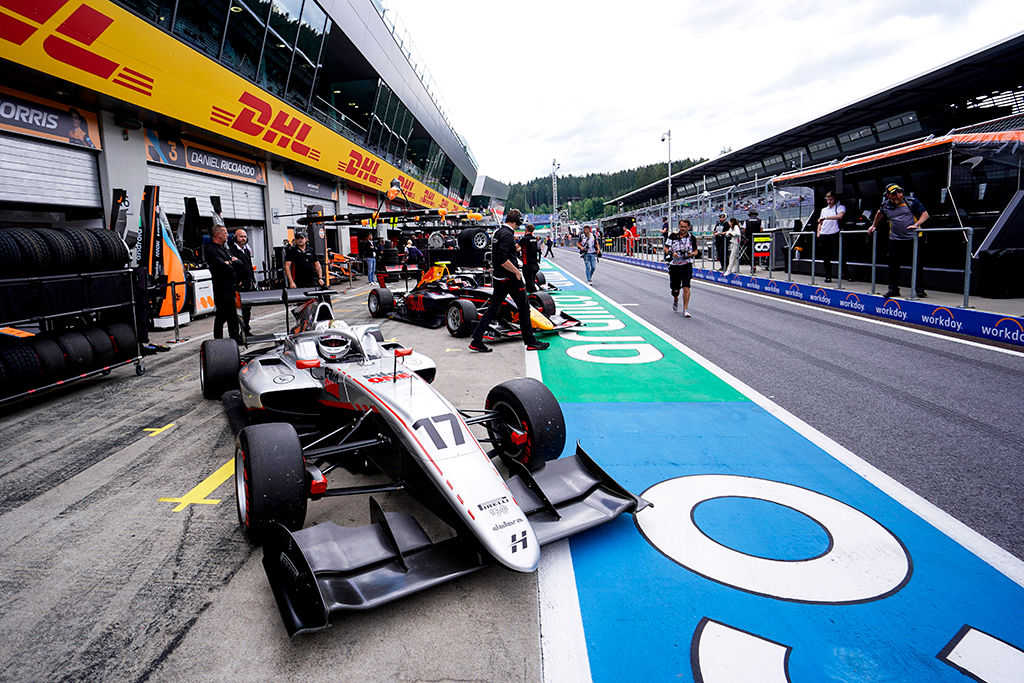 Kaylen Frederick 5th in Qualifying at Red Bull Ring. Unable to complete a flying lap due to traffic and red flags in the closing minutes, there was promise for more with the fastest Sector 1 on the board. 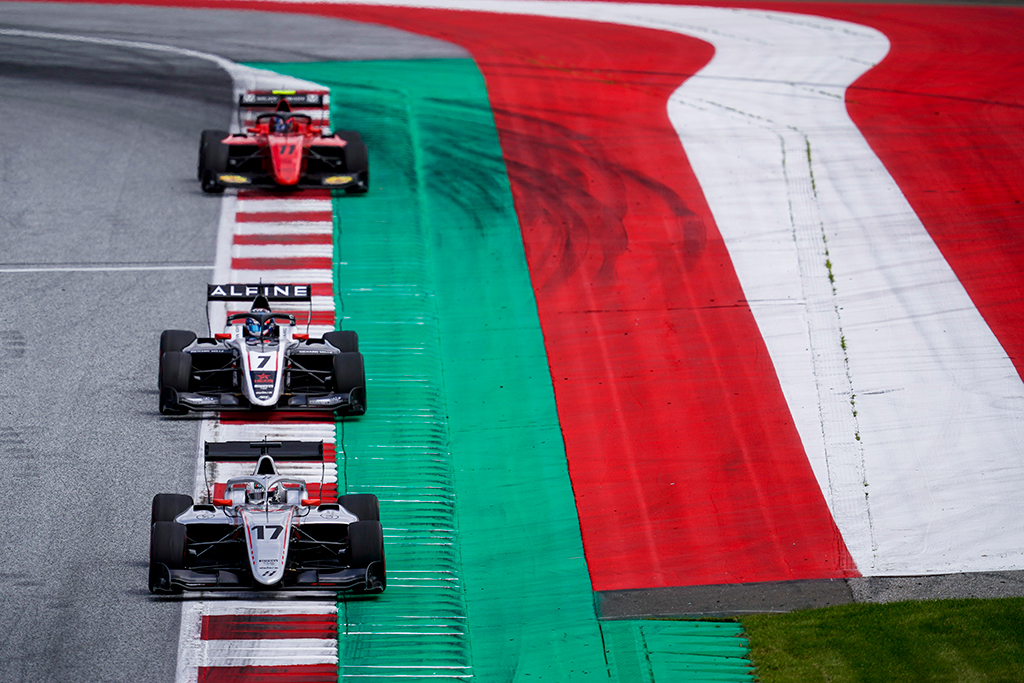 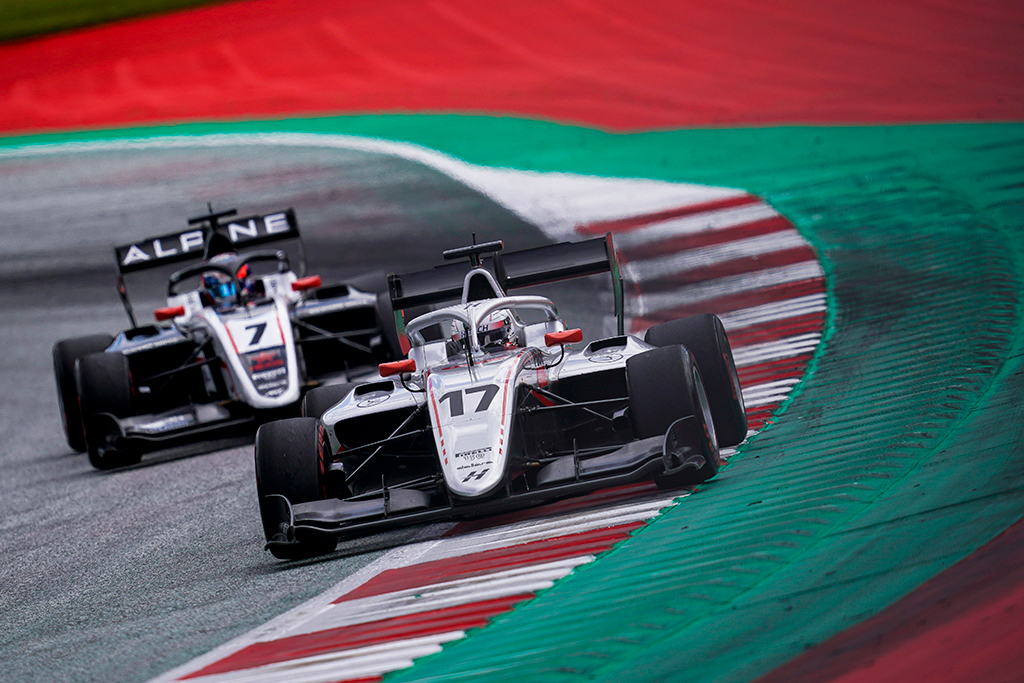 Starting in 8th and with elbows out, Kaylen held off the attacking Bearman (Prema) in the opening corners but eventually gave way and dropped to 9th. The safety car is called out for lap 2 following an incident in Sector 2. At the safety car restart on lap 5, Kaylen dove down the inside of Bearman, only to lose it again in following turns. .

On Lap 5. Turn 1 Kaylen retakes 9th, from LeClerc, now sandwiched between the two Premas,  and continues to do battle with LeClerc. On lap 6, Correa’s engine fails and he tumbles to the back of the pack moving Kaylen to 8th.

Lap 7 LeClerc pushes Kaylen wide, out-drags Kaylen to the next turn and moves Kaylen back to 9th. LeClerc (Prema) overtakes Stanek (Trident) next placing Stanek in front of Kaylen. Following another incident behind Kaylen, the Virtual Safety Car (decrease speed by 40% – no overtaking) is called out on lap 9. Racing resumes on Lap 10. In an aggressive overtake by LeClerc on Bearman (Prema) in front of Kaylen, the two Premas of LeClerc and Bearman battle, causing Maloney in the Trident to collide with Bearman and stopping Maloney’s race. Kaylen and Stanek evade the carnage moving Kaylen to 7th however also resulting in the safety car.

The safety car was called in on lap 14 and racing resumed. At the restart, Kaylen is off well and is close behind Stanek. Victor Martens dives on Kaylen to find his way through and is not able to make it work. Martens went wide allowing Kaylen to also hold off the pursuing Bearman in the battle. DRS reactivated on lap 16. Bearman and Victor Martens begin to do battle and increase the gap behind Kaylen. Bearman is assigned a 5-second time penalty on lap 18 after he was deemed to have left the track and gained a lasting advantage. On lap 18 Kaylen overtakes Red Bull driver Jonny Edgar and takes 6th place. Bearman soon after overtakes Martens and Edgar and moves behind Kaylen. On the final lap 21, Bearman dives for an aggressive overtake however Hitech radios to Kaylen to let him through and not risk his position as Bearman has a 5-second penalty (and later is assigned a 17th place finish). Kaylen finishes in 6th position in a well-fought race with the championship leaders and ahead of Martins, Smolyar, and Isack Hadjar.

On a wet track with heavy downpour, the feature race was started on wet tires, in single-file, and behind the safety car for a rolling start. With trailing spray from tires, visibility was extremely poor, yet the drivers were off. Stanek attempted an overtake mid-lap however Kaylen held him off under tricky grip conditions.

Drivers consistently searched for grip and looked for traction zones as the rain lessened. Kaylen began to close in on LeClerc on lap 4 with Stanek also hunting to close his gap behind Kaylen, yet maintaining distance.

On lap 10, Kaylen is 2 seconds behind LeClerc and Stanek closes to within 7/10th, however dropping back on lap 13 to one second. This increasing and decreasing gaps between Kaylen and Stanek continued for four laps.

The Charouz cars collide in Sector 3 on lap 14 calling out the safety car. Racing resumes on Lap 16.

On Lap 20 a double-yellow flag is shown in sector 2 requiring no overtaking near that incident, swiftly converted to safety car as a hazard remains on track. On lap 22 racing resumed. Kaylen dove at the restart and battled LeClerc with three laps to go. Kaylen briefly held the position however later relinquished back to LeClerc at the end of the lap.

On lap 24 (the penultimate lap), after brilliant driving in wet conditions in 5th place, Stanek made a last-ditch attempt to get past Hitech’s Kaylen Frederick for fifth and punctured Kaylen’s rear tire. Unable to continue, Kaylen pitted for a new tire and finished 23rd and falling outside of the points.

Stewards assign Penalty to Stanek:
Stanek started an overtaking maneuver on the Hitech Grand Prix driver up the inside of Turn 3’s braking zone. Stanek locked up with no ability to make the corner, went straight on and both cars collided. The Stewards found that onus to overtake in a safe and controlled manner lied with Stanek, who was deemed to be at fault for the collision. 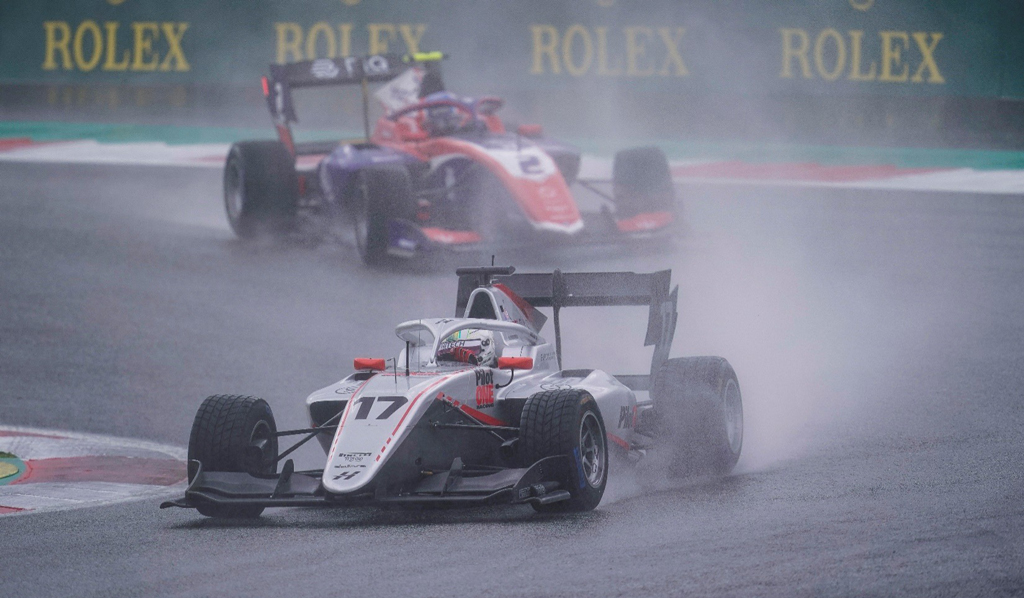 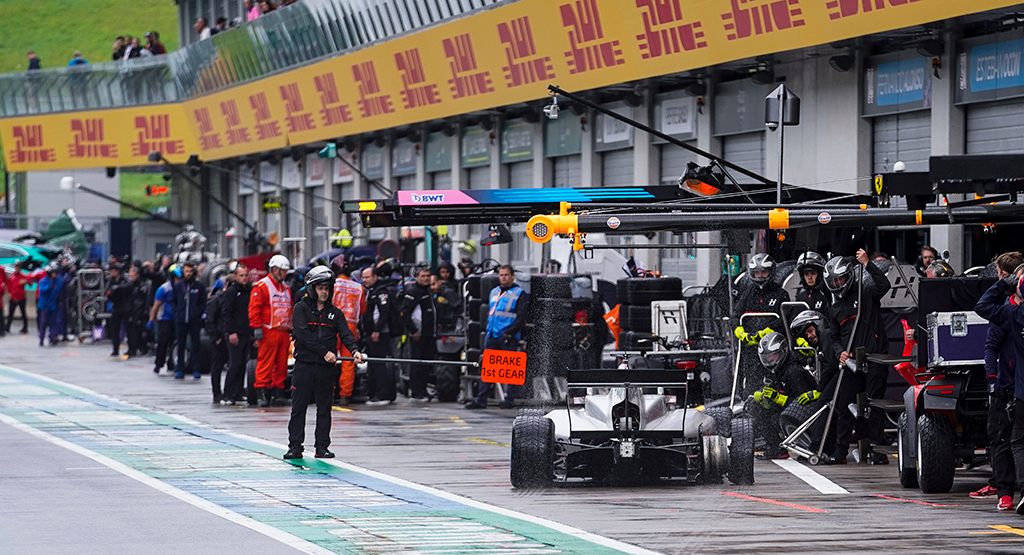 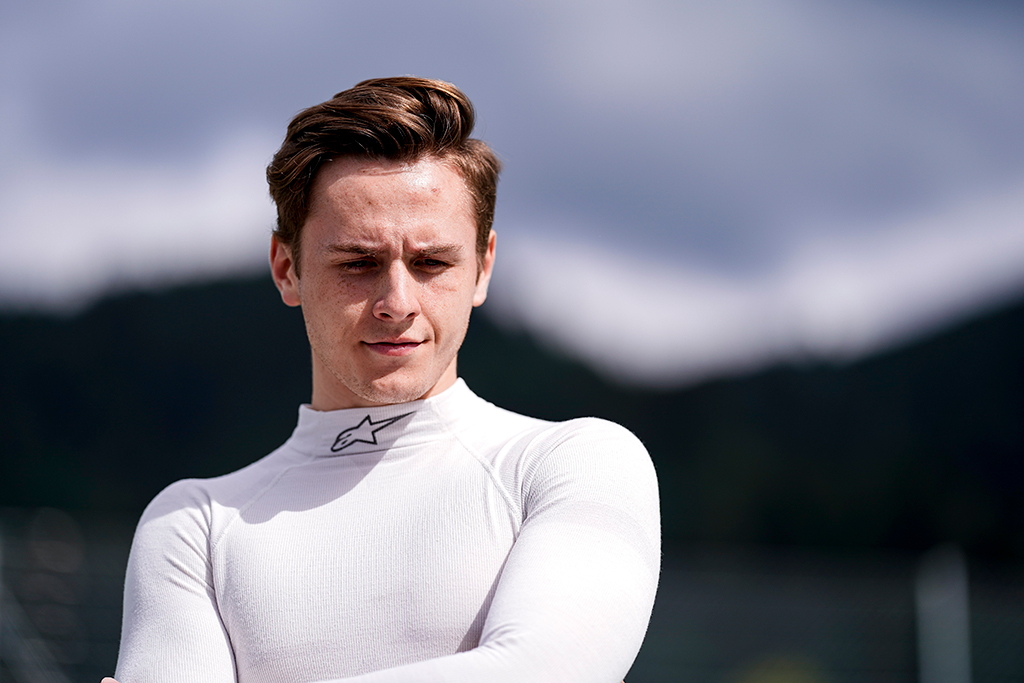