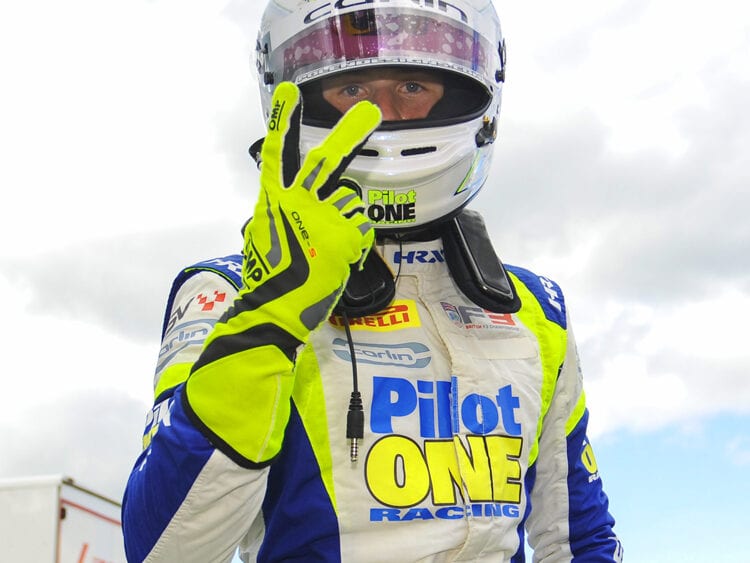 “Carlin’s Kaylen Frederick led from start to finish to take his second victory of the day in the final race of the first 2020 race weekend at Oulton Park this afternoon (Sunday), taking the championship lead for the first time in doing so.” 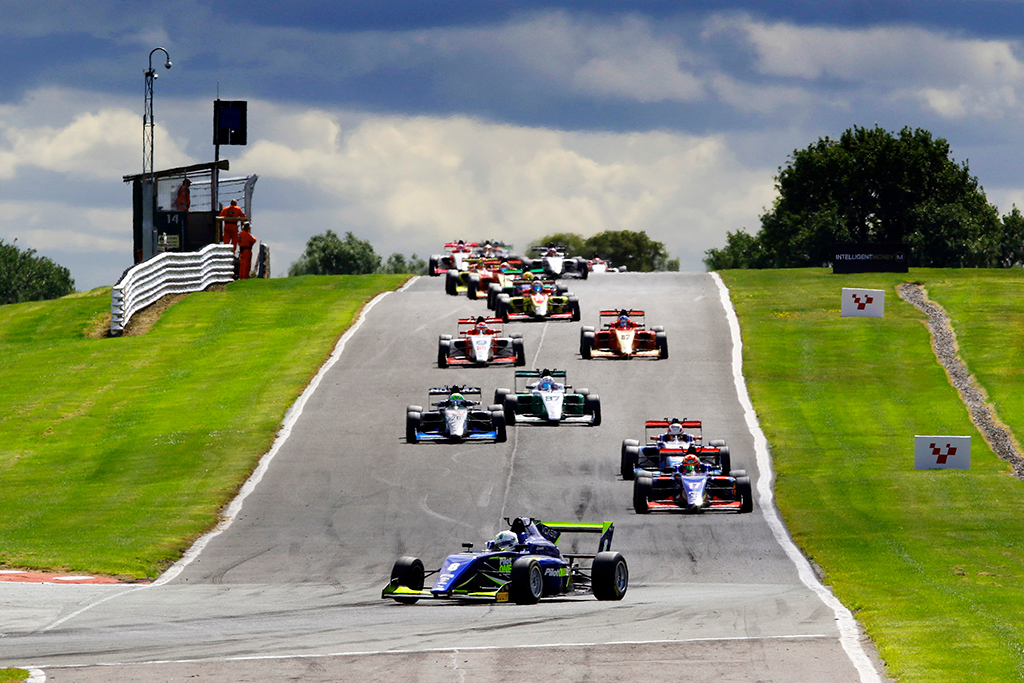 Credits: Many thanks to Jakob Ebrey for the stunning photographs provided here for Kaylen Frederick!

What they said | Oulton Park Qualifying:

Kaylen Frederick:
“We can’t be upset with the result, two good starting positions and there’s an opportunity to pick up a position in race one and race three. It’s a great start to the weekend, great start to the season and we missed out because I went for a cool lap instead of another push lap but I’m pretty happy with the pace we had before that.

“That [victory] is obviously the goal, I’m going to focus on getting the best start I can and pounce on any opportunities that present themselves and we’ll see how the race goes.” 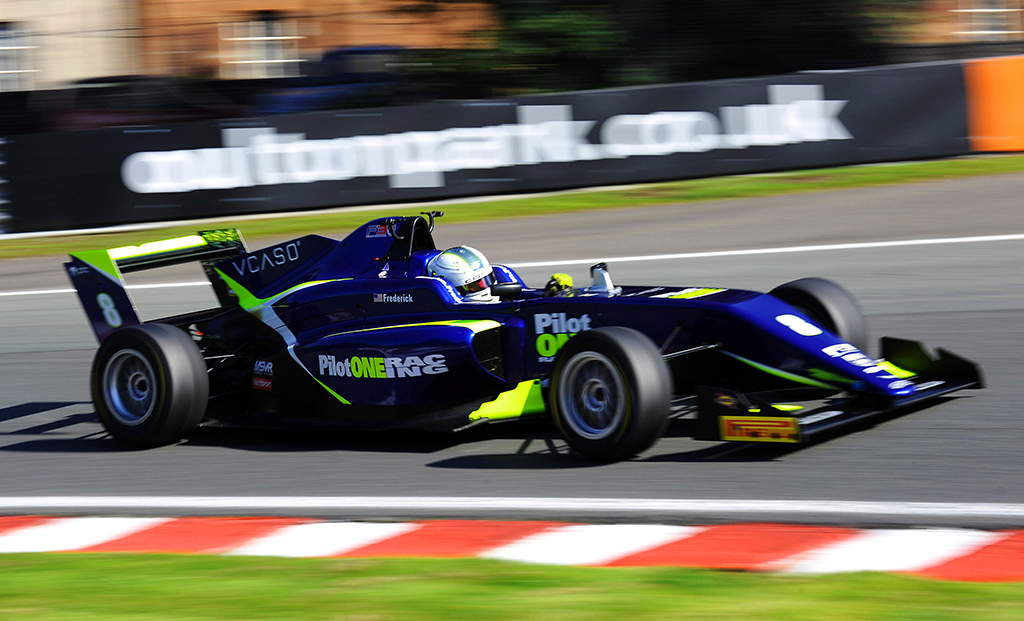 Brief Recap:
At first designated as the winner of Race 1 with a 3.96 second lead, Kaylen later received a 10-second penalty for the front wheels being outside of the start box, revising Kaylen’s finish position to P8:

“Kaylen Frederick was living the American Dream after leaving Oulton Park last Sunday, having secured a brace of victories in the opening round of the 2020 BRDC British F3 Championship.

The Carlin driver – back for a second season in the category – may have been the man to beat across the weekend’s four processional races, but it was series debutant Louis Foster who claimed pole for the opening encounter.

The British F4 race winner proved too quick for his own good, however, initially jumping the race-one start before coming to a halt several feet in front of his box. Once the lights went out, it was fellow front-row starter Frederick who got the jump and duly led home Double R’s Foster – awarded a 10-second penalty for his transgression.

Frederick was also judged to have jumped the start and was handed a 10s post-race penalty, which dropped him to eighth. Jewiss, another sophomore driver, thus took the win from De Pauw and Carlin racer Nazim Azman.

“I saw him [Foster] jump and my knee-jerk reaction was to lift the clutch slightly and I jumped out of the box,” said Frederick. “It was my bad, it wasn’t like I was focused on him but he was just in my peripheral vision.

“The rest of the race though was just amazing, it’s a shame it was taken away but without that safety car [to retrieve Josh Mason’s stricken car] we could have won the race even with that penalty.”

Winning with a 10s penalty in a one-make category as close as British F3 might seem almost laughable, but Frederick showed his true pace in race three on Sunday. In an uninterrupted race, he won by 8.65s – the third largest race-winning margin of the series in its current guise – having again got the jump on polesitter Foster, only this time both starts were judged legal.”

Updated Race 1 Result: Jewiss wins after Frederick penalty
https://www.britishf3.com/british-f3-news/updated-oulton-park-race-one-result/
“The race result for the opening race of the BRDC British F3 season at Oulton Park has been amended after 10 second false start penalties were applied to original winner Kaylen Frederick, and Douglas Motorsport’s Manaf Hijjawi, who originally finished in 10th.” 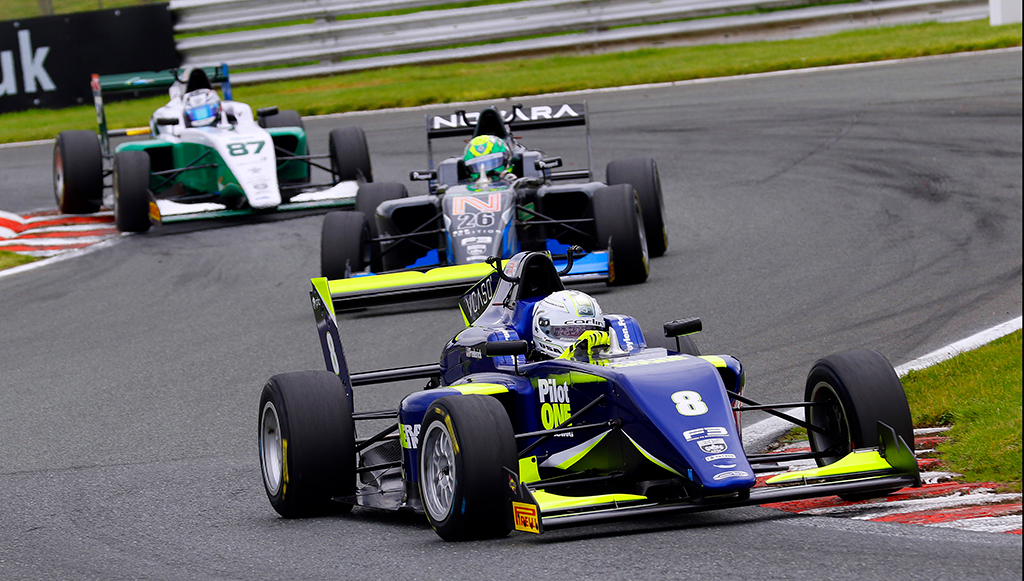 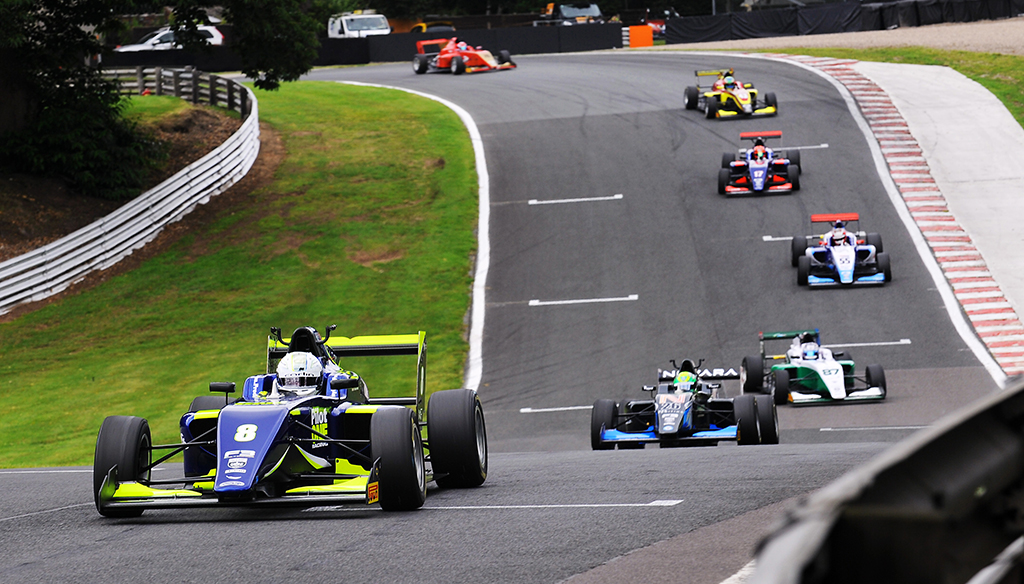 “The American driver made a great start from second place to blast past pole man Louis Foster, and then pulled away at a rapid rate to take the chequered flag over eight seconds clear of teammate Nazim Azman, the third largest margin of victory in BRDC British F3 history. “ 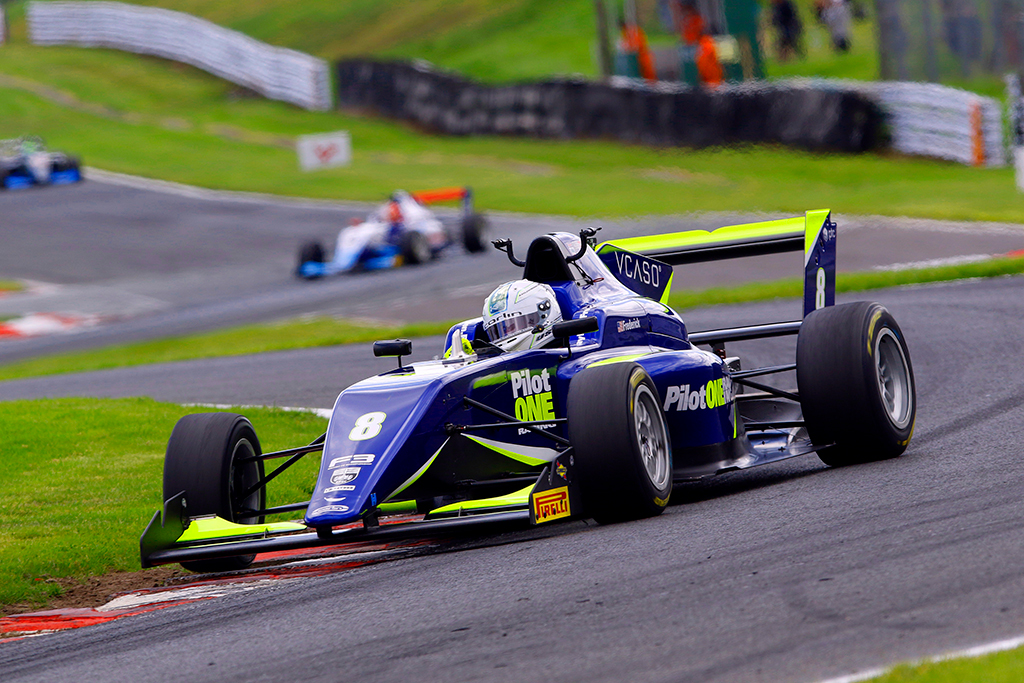 Race 4/August 2nd: Frederick Makes it a Sunday Double to Steal the Championship Lead & Fastest Lap of the Weekend

Winner, Kaylen Frederick, Carlin:
“Another really great race. Not as dominant as the one before today, but a win is a win and a decent margin behind me so I’m really happy. Again, the team gave me a great car and we showed some very strong pace.

“In the first couple of laps I was keeping it fairly chilled because I knew a fastest lap in this race didn’t really mean anything, whereas in the last race (Race 3) it meant pole for this Race (Race 4). Although I was able to have a bit more of a breather, I put in some push laps towards the end to get fastest lap.

“I’m not exactly sure where I stand [in the championship] but for sure the race one penalty hurt me quite a bit, but all we can do is finish with strong consistent results from now on and see where we end up.” 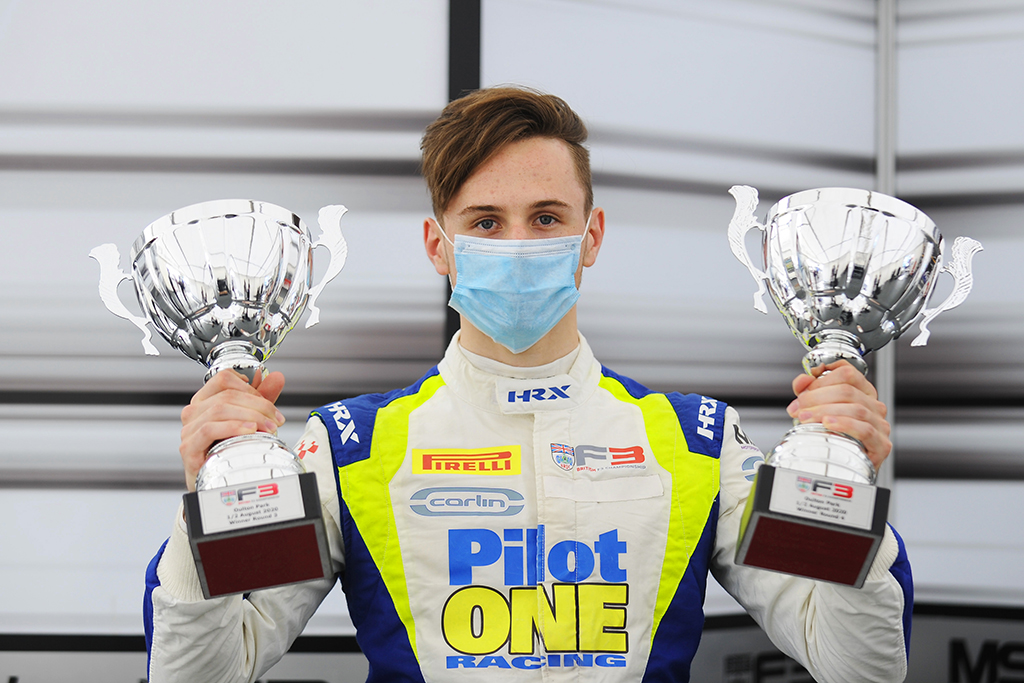 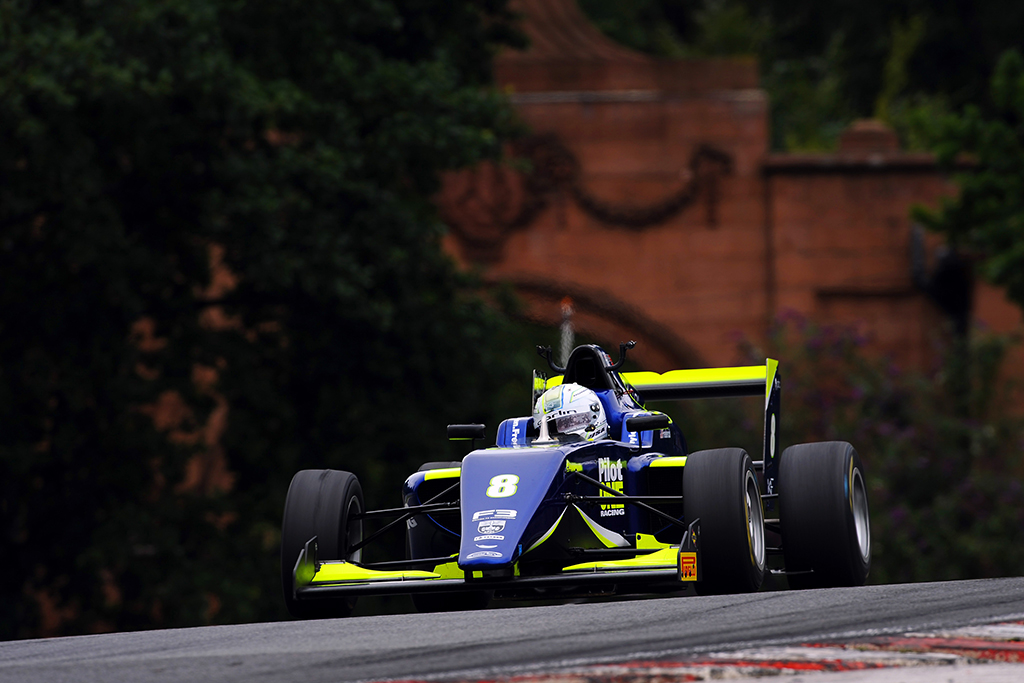